Why Scholarships Are Vital for Low-Income Students and Families

We have said it before, but it bears repeating as often as possible: higher education has never been more important, but it’s also never been more expensive. For students from low-income families, this is a catch-22 of massive proportions. If college were accessible and affordable, they’d have a better chance to break the cycle of generational poverty; instead, the struggle to pay for higher education can leave students in dire financial straits. 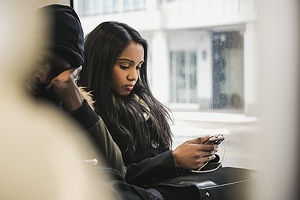 At Scholarship America, we believe in putting students first. That means addressing issues of affordability and access at a policy level. It also means using private-sector scholarships to fill the affordability gap for low-income students. Here’s how, and why, that effort is so crucial.

Higher education is the best ticket out of poverty.

Despite the cost, despite student struggles, despite the difficulty, one thing remains true: the more education you get beyond high school, the better your prospects are.

The numbers are stark. As reported by ReUp Education, “On average, those with a bachelor’s degree earn a premium of roughly $30,000 each year relative to those with just a high school diploma. Over a lifetime of work, a college graduate with a bachelor’s degree would earn more than $1 million more than an individual with just a high school diploma.”

The benefits of higher education extend beyond the balance sheet as well. Nearly 90 percent of employed, college-educated millennials see their current job as part of a career path, while more than 40 percent of high-school-only millennials consider it “just a job.” Those with higher education report better health; they volunteer and vote more; they have longer life expectancies. In short, education makes lives better.

There’s a gap between cost and aid.

Unfortunately, too many of the students who could most benefit from higher education are finding it harder and harder to afford.

The National College Access Network (NCAN) recently released a study seeking to answer a simple question: can low-income students afford college? The answer: in a remarkable percentage of cases, even if they’re doing everything right, the cost is simply too much to bear.

Specifically, the study is entitled “Shutting Low-Income Students Out of Public Four-Year Higher Education,” and it looks at the cost of attending more than 500 four-year residential public colleges across the United States. These schools are traditionally the backbone of American higher education; they are the flagship, land-grant, research-oriented universities that people from all walks of life have long aspired to attend.

And they’re being priced out of reach.

The report is clear and surprising. It “considers the affordability of four-year public institutions for an average Pell Grant recipient who receives the average amount of grant aid, takes out the average amount of federal loans, and collects reasonable work wages to contribute to an education. An astounding 75 percent of residential four-year institutions – including 90 percent of flagships – failed NCAN’s affordability test. The average Pell Grant recipient in our model would be able to afford just 139 of 551 residential four-year public institutions across the United States.”

As College Possible’s Traci Kirtley says, “In the mid-2000s, I often said with confidence that if we did our job right, and our students followed our guidance, they could find a college pathway where finances did not have to be a barrier to success … A decade later, I can no longer say the same thing.”

Scholarships can help fill that gap.

The NCAN model takes into account every avenue of public-sector assistance  available to most students. It also reflects the reality that virtually all students work while in college. It states, clearly, that those sources of aid aren’t currently enough, especially for low-income, Pell Grant-eligible students.

Something needs to fill the gap. Scholarships, both private and institutional, can help low-income students — and their impact often goes beyond just the financial boost.

The California-based College Futures Foundation works with communities and colleges around the state to provide need-based scholarship aid to students, and their “Strategic Scholarship Giving for Student Success” report analyzes a wealth of data around the topic. The results they found are incredibly encouraging: “Students in California who receive financial aid have improved persistence—they stay in school from year to year at higher rates than their peers who have not received this support. … Approximately 95% of the California State University freshmen who received [College Futures] scholarships in 2009 returned for a second year of study, while only 82% of CSU freshmen from the same class statewide returned.”

Given that these scholarship recipients are among the lowest-income students in the state, that rate of persistence is especially remarkable. And it’s mirrored in other institutional programs geared toward low-income students, such as the “last-dollar” Bridging the Gap scholarship at Rutgers University and Georgia State University’s Panther Retention Grants. (Like Scholarship America’s Dreamkeepers program, the latter provides emergency assistance to students faced with unexpected financial crises.)

Private scholarship providers have seen similar success. The Gates Millennium Scholarship has helped more than 20,000 students complete their degrees; the Jackie Robinson Foundation has provided assistance for more than 40 years. The Dell Scholars program, created by the Michael and Susan Dell Foundation, provides a unique form of wraparound support to low-income students who are often the first in their families to go to college. Since 2004, its combination of financial, social and mentoring support has helped more than 4,300 Dell Scholars, who “are 25 percent more likely to earn their bachelor’s degrees within four to six years of high school graduation compared to students of similar socioeconomic backgrounds.”

Whether scholarships are coming from a student’s school, a private-sector provider or a local foundation, they are a vital way for learners from low-income backgrounds to afford higher education. That education is a potential ticket out of poverty for those who complete their degrees—and that means scholarships matter now more than ever.