We are thrilled to have such a diverse and interesting class of Dream Award recipients! Ezekiel’s story continues our series on each of the ten 2017 students. Throughout the next few months we will be posting more stories on a bi-weekly basis featuring these amazing individuals. Check out previous student stories by visiting our Success By Degrees blog. 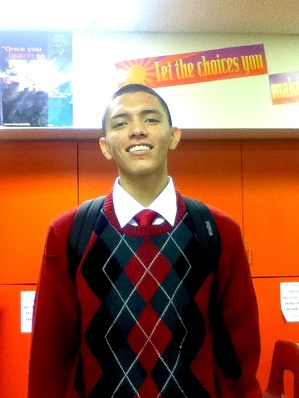 When Ezekiel Ogden was young, he lived on the Navajo Reservation in Arizona. His parents divorced when he was just five years old, and Ezekiel and his brothers lived primarily with their mother who worked two jobs.  During the day, she was a substitute teacher; in the evenings, she would head off to one of several third-shift jobs. By the time the boys got home from school, their mother would have to leave again, so their grandma would look after them.

Life changed dramatically when Ezekiel’s mom remarried. Eager to get her children off the reservation —and away from the influence of gangs and the prevalence of alcoholism—she uprooted the family to live with their stepdad in Phoenix during Ezekiel’s pivotal years of adolescence. They lived in a safer neighborhood and Ezekiel’s mother could spend more time with her children, but the life of a stay-at-home mom did not suit this woman who knew nothing but work. Their stepfather, however, did not like the idea and prohibited Ezekiel’s mom from finding even a part-time job.

Ezekiel’s mom fell into depression and developed an addiction to alcohol. She concealed it from her children for a while, but when the day drinking started, it was hard to ignore the problem.  Watching his mother numb her pain with alcohol took a toll on Ezekiel, and he tried to avoid home by spending time at friend’s houses. After she was hospitalized, Ezekiel made the decision to move back to the reservation, to live with his grandmother for a more consistent home life and to encourage his mother to get help.

Despite this encouragement, two months later, Ezekiel’s mother went into intensive care. Ezekiel remembers going to see her and pleading with her unconscious body to hold on. Holding her hand, he whispered to her, “We need you. You’re the one who holds this family together.” A few hours later she passed away.

In just two years, Ezekiel lost his mother and an uncle to alcoholism. Seeing this epidemic among the Navajo people, he became interested in the history and culture of his origins. In a linguistic course at a satellite campus of Utah State University, Ezekiel discovered the beauty of the Navajo language, and how it communicated fundamental ideologies of his cultural heritage that have begun to die away.

“Our language can help us understand our old ideology, our old perceptions on life, so that way we can get back to being a beautiful, peaceful society,” Ezekiel said.

This inflamed a desire to develop Navajo language camps for children on the reservation so that one day there is a generation of Navajo children where Navajo is their first language rather than English.

Thanks to the financial assistance of the Dream Award, Ezekiel is able to work on developing Navajo language camps  while he pursues a degree in secondary education at Northern Arizona University.

“[I’ve learned] we do have the choice to change the future of ourselves and the people around us.” Ezekiel said as he reflected on his life. “That’s how I approach life—waking up each morning hoping that I impact someone’s life.”