"I do not let my challenges define who I am:" Dream Award Scholar Jamisen Moore - Scholarship America

“I do not let my challenges define who I am:” Dream Award Scholar Jamisen Moore

Jamisen Moore’s interest in understanding the diversity of people and culture, and her desire to help others get quality healthcare, is rooted in her experience starting life as an orphan in China. Diagnosed with epilepsy at a very young age, she lived the first year of her life in a large orphanage that was poorly equipped to handle seizures and other effects of the disorder.

Fortunately, when she was just one year old, Jamisen was adopted by a recently widowed American woman—a health researcher who’d begun the adoption process with her late spouse. As she grew up in Durham, North Carolina, Jamisen spent plenty of time in hospitals, and she grew to enjoy observing and talking with doctors and other medical personnel. Her experience, along with her mother’s career, piqued her interest in studying health care.

“I was constantly asking questions about medical procedures and began to imagine myself as a doctor,” she said. 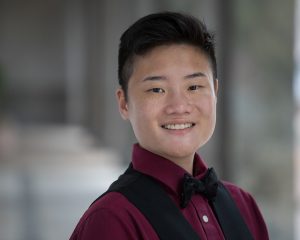 This interest in medicine helped Jamisen find some measure of focus—something she didn’t always have as a student.

“Growing up in the U.S. as a Chinese kid with a Caucasian, widowed, single parent, I always felt I was a bit different,” said Jamisen. “Besides dealing with epilepsy, I was diagnosed with attention-deficit/hyperactivity disorder (ADHD), which sometimes makes it hard from me to focus, complete tasks, prioritize projects and manage my time.”

She attended the Durham School of the Arts – College Prep for high school, and at age 16, went through surgery to remove damaged brain tissue and alleviate her seizures. While it helped her symptoms, the experience was emotionally and financially challenging for her and her family.

“I was sometimes bullied by students and a teacher who did not understand ADHD, epilepsy, or the initial impact of the brain surgery,” she explained. “I was once told by a principal that I did not belong in public school because of my disabilities, even though I was an honors student and well-liked by my teachers. A few of my teachers became friends and mentors.”

Thanks to those teachers who saw her potential and encouraged her along the way, Jamisen worked hard on her academics. She won the school’s Excellence Award for English Literature and Writing. She was a volunteer editor for the school Publishing Club and became a published author, and was a volunteer tutor and advocate for students with disabilities.

After her brain surgery, she needed time to recover. Taking a gap year, she regained strength, tutored students in STEM subjects and conducted lab experiments. She also became a dedicated activist, advocating for human rights through social media, marches, organizing and presenting at Chinese and other Asian events on campus, as well as working for the LGBTQ community.

After graduating, Jamisen entered college at the University of North Carolina at Greensboro (UNCG) where she embarked on a major in Biological Anthropology with a minor in Biology and Chinese—all ways of focusing on the origin, evolution and diversity of humankind, as well as adaptations to environmental stresses.

Unfortunately, after working in health research in the United States and internationally for 35 years, Jamisen’s mother developed serious health problems and became disabled at the age of 50. This had a serious impact on their household income. And when the scholarship she’d received as a freshman and sophomore ran out, Jamisen needed financial help to continue in school.

That’s when the Scholarship America Dream Award came in. Jamisen became a Dream Award Scholar in 2018, earning a renewable award that would cover her final two years of tuition. She said that, thanks to the Dream Award, she was able to focus on her college coursework (appearing on the Dean’s List), and on opportunities to pursue her interests, including her passions for medicine, music and working for marginalized communities.

While an undergrad, Jamisen completed pre-med camp at Duke University Medical Center, became certified in Lifesaving/CPR and Emergency Medical Training and served as an Emergency Medical Technician (EMT) volunteer. Thanks to her lifelong interest in medicine—and her sense of humor—she was able to get through the intensive program, a next step on her journey toward medical school.

During her time on campus, she remained active as a volunteer and an advocate for disadvantaged groups, helping out as a nursing home aide and music therapy performer. And she continues to be committed to bringing her personal and cultural history to her future career as a physician. “I plan to study Anthropology and Chinese in China. I love learning about different cultures and the human body through courses and my work.”

In an effort to learn more about her heritage and trace her roots, she discovered a cousin from China who happened to immigrate to the same state. Amazingly, her cousin lives within a few miles of her college and they have met several times.

This spring, Jamisen graduated from UNCG with honors as a part of the Lambda Alpha National Anthropology Honors Society. In the fall, she plans to attend the University of North Carolina Chapel Hill part-time as she does research and finishes her prerequisites for medical school, while working as an Emergency Room technician or an EMT.

From an orphanage in China to a college degree in North Carolina, Jamisen has learned much about life’s toughest challenges. “I can empathize and better help others because of my personal experiences,” she said. “I do not let the challenges define who I am. I’m not going to say it has been easy, but I definitely learned how to navigate my life and to advocate for myself and for others facing obstacles or discrimination.”