Raised in Mexico City, Daniel Hernandez moved with his parents and older brother to the United States when he was in preschool. His father moved their family to Albuquerque, New Mexico for a job at a church for Hispanic congregants. After six months of working there and not being paid, money became very tight and he realized he needed to find a new opportunity to take care of his family.

Fortunately, his dad then heard about an opportunity to start a Hispanic congregation in St. Louis, Missouri, by using an existing English-speaking church’s facilities. The move helped his family get a new start and Daniel’s younger sister was born in St. Louis. They eventually settled down in the nearby suburb of High Ridge when Daniel was 10, and his own career dream began to take root. 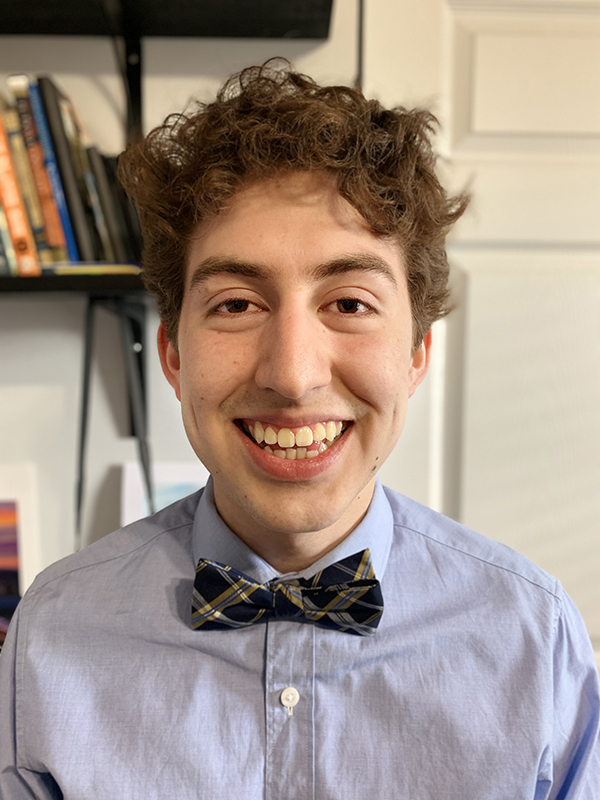 Ever since he could remember, Daniel felt there was a part of him that thrives and lives in hearing and telling stories. His love of the story helped make him an avid writer. While growing up, he loved watching movies with his family.

“We watched Finding Nemo repeatedly, as that was the only movie we owned our first years in America,” he said. “By the time I reached middle school, I wanted to learn how movies are made. Watching movies inspired me to dream about working in the film industry. I especially enjoy the creative aspect of developing a story and became interested in becoming a scriptwriter.”

A bright and inquisitive student, Daniel also discovered a keen interest in music at a young age, and went on to excel in both music and math—joining his high school’s math club, participating in math competitions, and being honored as part of the National Honor Society and gifted program.

Despite his wide range of talents and interests, when it came time to decide on a college path, Daniel’s deep love of storytelling won out.

“Though I enjoyed math, I ultimately chose to study communications and pursue my passion for writing in college,” he said. “My fascination with writing stories is finding the common connections we can all relate to no matter where we started or live,” said Daniel.

A Part-Time Job Pays Off

Urged by his parents to find a part-time job at age 14, Daniel made the most of the experience. “It helped me begin writing ‘Before Fall,’ a full-length musical about something we all probably can relate to: our first part-time job.”

His part-time work also provided an unexpected financial benefit when he decided on his next steps. “I knew I wanted to attend Film school on one of the coasts, as there is much more of a focus on my major in those regions,” he explained. “Boston University has a very good film and TV program and it fit best with my financial needs.”

While he felt fortunate to have a scholarship and financial aid, Daniel calculated after his freshman year that he’d still need to find more funding. Attending a large college in a major city is expensive, and his parents always struggled to make ends meet when reviewing their monthly budget.

Fortunately, his communications with Chick-fil-A also made him aware of the Scholarship America Dream Award—a scholarship designed for students facing exactly the situation Daniel found himself in at the time. He applied, and became a 2019 Dream Award Scholar.

“I am appreciative to have been chosen for the Dream Award and continue to pursue my passion for writing in the entertainment field,” said Daniel. “Instead of worrying about finances, I can focus on my studies and work on getting better at my craft. The Dream Award helped cover additional costs beyond tuition and gave my family and me peace of mind.”

Making the Most of College

When he first transitioned to college, Daniel thought he would continue to get good grades without much effort. It didn’t happen, though, and he realized he needed to apply himself to maintain his grades. Once he found his footing, he said his biggest challenge became balancing his many interests—but he soon realized this is actually a blessing for his chosen field.

“A writer needs a thirst for knowledge to learn about many diverse subjects,” said Daniel. “I once considered a career in medicine and also enjoyed learning about history and philosophy.”

Thanks to those varied interests, Daniel relishes the fact that his film and TV classes give him free range to develop creative ideas. And as a member of BU’s Honors College, he’s taking advantage of learning and storytelling opportunities around the world.

In July, he traveled with the Honors College to Uganda to visit a refugee settlement and study the refugee crisis. The students broke into working groups to discuss the settlement and come up with possible solutions. Daniel’s group focused on the economic side of the situation, but he also observed the human side of the struggle.

“I want to share stories that are impactful. I also want to share ideas that align with the good values that I learned from my family,” he said. “I am interested in learning everyone’s story—not telling a story with an agenda. The refugees I met in Uganda have very compelling stories that are not being told.”

Learning His Own Story

In addition to exploring around the world, Daniel is continuing to delve into his own story, about what it means to be an immigrant and a Latino in the U.S.

“There is a challenge for minorities to stay in the same city and community, as it is sometimes hard to find the motivation to leave your comfort zone and get additional education,” he said. “I am still figuring out who I am. Society has preconceived notions about Latinos and it is also hard culturally if you want something different than your peers and family members.”

Daniel’s affinity for storytelling has helped him find ways to break out of those preconceptions.

“Throughout my life, I have met so many different characters—some vastly different from me, like Forrest Gump; and others who have a life that I can relate to, like Usnavi from the Tony Award-winning musical In the Heights,” he explained.

(Originally played by the show’s writer and Hamilton creator Lin-Manuel Miranda, Usnavi is a first-generation Dominican-American bodega owner, dealing with the pressure of rising rents and closing businesses in the Washington Heights neighborhood of New York.)

As Daniel continues his education and strives to tell new stories, he is aiming to get an internship and build up a portfolio of his work. After he gets his undergraduate degree, he wants to keep learning.

And, of course, writing.

“I’m interested in attending a graduate program in writing,” he said. “I’m also thinking about law school but hope to be a writer in some capacity. I like to find stories that are meaningful and develop interesting characters that have an impact on people.”