“I don’t give up easily:” Dream Award Scholar Sydney Kamen

Don’t let anyone tell you no.

That’s Sydney Kamen’s mantra and it has taken this 2019 Dream Award Scholar far. She will graduate from Dartmouth College in June, 2020 debt-free with a degree in geography and global health.  Kamen plans to continue on and earn a master’s in humanitarian action and a doctorate in public health.

A decade ago she was hospitalized with a grim prognosis that she would lose her sight, hearing, and ability to walk. But Sydney and her parents refused to accept such a dark fate. 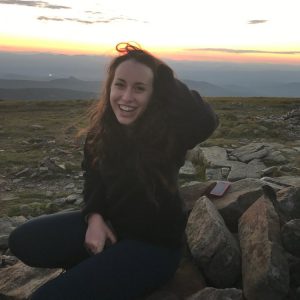 “I don’t give up easily,” Sydney says. She missed a year of school, but recovered. “I am a true believer anything can happen,” she says, and her life is proof.

In high school Sydney talked her way onto a college spring break service trip to Thailand, a first-hand exposure to the lived realities of billions around the world that proved life altering.

“It was my first exposure to the ways in which my lived experience differed so significantly from the communities I was now engaging with. Aspects of my life that I had always taken for granted, like clean water and soap, were neither guarantees or easily accessible. Hand washing, an assumed practice for me, was limited due to the prohibitive cost of soap in rural communities. Community health workers shared with me the tragic statistics of under-five mortality rates due to poor hygiene and sanitation, noting the simple and high-impact ways the situation could be improved in their communities. My parents raised me with the adage, if you see something, do something.”

Sydney did something alright – at 15, she started a nonprofit called So Others Are Protected (SOAP). She learned soap was a highly effective, but prohibitively expensive, public health intervention. Buying soap for a year could take as much as 30% of a household’s income. She started a pilot effort recycling previously used bars of soap from local hotels, partnering with communities and training peer educators to help people understand that handwashing could dramatically reduce the spread of disease and associated deaths from diarrhea and respiratory infections by as much as 50 percent in children under the age of five.

In the past seven years, SOAP has distributed over 50,000 bars of soap to rural and historically marginalized communities in Thailand, Burma, India, Rwanda and Uganda. All locations of operation are places where Sydney has personal relationships with the community from studying abroad in immersive experiences.

“I am surrounded by people who want to help and make a sustainable and positive impact,” Sydney said. “My work has been demanding and challenging, especially as SOAP has grown, but hygiene and recycling are things everyone can get behind and benefit from; it’s a win-win-win. I am thrilled to be working with an incredible team developing and implementing local solutions to local problems.”

When it was time for Sydney to consider colleges, she wanted to follow her dreams, and her global health idol, Dr. Lisa Adams, to Dartmouth College.

Overcoming the Odds at Dartmouth

Her high school counselors discouraged her from applying and refused to support her application, citing her lack of a 4.0 GPA or extraordinary test scores. “I was a strong believer that my actions spoke louder than my test scores,” Sydney said. “I felt really, really let down. This was my first encounter with the politics present in academia.”

She persevered and ultimately got into Dartmouth, where Dr. Adams is her professor and mentor. On Sydney’s Scholarship America Dream Award application, Dr. Adams wrote: “I place Sydney in the top 1% of students I have taught or mentored at Dartmouth over the past 15 years.”

Sydney has excelled at Dartmouth, where she has been an Army ROTC Cadet, Global Health Fellow, War and Peace Fellow, Great Issues Scholar, and Peace Corps Campus Ambassador. She speaks six languages and has served as president of the International Development Forum and traveled to Rwanda and Tanzania with the U.S. Department of State. In 2017, she was named by Her Campus as one of 22 Under 22 Most Inspiring College Women.

“I was so, so excited,” Sydney said of receiving the Scholarship America Dream Award in 2019. “It is such an honor to be recognized by an institution that shares my vision. When we came to Washington for the 2019 Dreams to Success festivities we spent time getting to know and learning from our fellow scholars, all who have overcome obstacles and had different experiences. Scholarship America really cares about their students and our success. It is such a gift to have so many people who are truly invested in my success so unquestionably in my corner.”

“It came at the right time. I was having a tough semester and getting the award reminded me there is a team behind me, I am not alone. I stay in touch with my cohort through Facebook and Yifan He, a 2018 Dream Award Scholar, has become a strong source of friendship and inspiration for me. The experience was so empowering. I will pay it forward and back, left and right!”

Sydney’s younger sister is just starting college. Her advice to her sister: “You are the keeper of you. No one has the right to get in your way.”

“I am grateful to be alive,” Sydney says. “I am determined to see and fight for every tomorrow.”