Support of Minority Scholarships Opens Doors for Everyone - Scholarship America

Support of Minority Scholarships Opens Doors for Everyone

Earlier this year, President Barack Obama launched “My Brother’s Keeper,” an initiative to unlock the potential of boys and young men of color. The president’s memorandum made it clear: There are gaps in opportunity for those who identify as minorities that need to be closed. As part of the initiative, the task force will tackle increasing college completion — a goal that aligns with the work Scholarship America has done and will do. 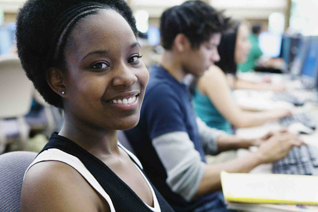 From the federal government down to local organizations, it’s clear that higher education is a priority nationwide. Just this past week, the Federal Reserve Bank of New York published a report that outlined the economic benefits of college. “[O]ver the past four decades, those with a bachelor’s degree have tended to earn 56 more than high school graduates,” the report’s researchers wrote. And around the country, Scholarship America Dollars for Scholars affiliates collectively raise and award millions of scholarship dollars to send community students to college.

It’s also clear that, despite the goal to see students persist in their higher education, disparities exist in access and completion. That’s why Scholarship America seeks to support all students through scholarships and educational support, and that includes minority scholarships. With your support, we’re able to help students nationwide achieve postsecondary success. The benefits of supporting scholarships for minority students are plenty:

Together, we’ll help ensure that more students make it to their college of choice. In Crossing the Finish Line: Completing College at America’s Public Universities, William Bowen, Matthew Chingos and Michael McPherson note how a student’s choice of school — even before they enroll — makes a huge difference in outcomes. “A surprisingly large number of students—especially those from poor families and those who are African-American or Hispanic—’undermatch,'” they wrote in The Chronicle of Higher Education. “That is, they go to less demanding four-year institutions than they are qualified to attend, to two-year colleges, or to no college at all.”

First Lady Michelle Obama’s own college experience echoes this research: “Some of my teachers straight-up told me that I was setting my sights too high,” she said. “They told me I was never going to get into a school like Princeton.” On top of that, as a first-generation college student, she recalled how she didn’t know how to choose her classes and “didn’t even know how to furnish my own dorm room.”

Support of minority scholarships not only provides a financial incentive to attend school — it also contributes to the emotional and psychological boost that students need to reach their college dreams.

Together, we’ll decrease barriers to higher education. Last year, Georgetown University’s Center on Education and Workforce published a fascinating, and harrowing, report on enrollment trends by race and institutional selectivity. “Since 1995, 82 percent of new white enrollments have gone to the 468 most selective colleges, while 72 percent of new Hispanic enrollment and 68 percent of new African-American enrollment have gone to the two-year open-access schools,” the report said. “The selective colleges spend anywhere from two to almost five times as much on instruction per student as the open-access colleges.”

It’s unsurprising, then, that barriers don’t stop with enrollment: Bowen, Chingos and McPherson note that completion rates are “strongly related to socioeconomic status, race and ethnicity.” With scholarships, students stand a likelier chance of enrolling — and staying — in school.

Together, we’ll increase skilled labor. In addition to pre-enrollment barriers, there’s also underrepresentation after graduation that can negatively impact job prospects. A 2010 report from the American Association of University Women, for instance, found that women in STEM (science, technology, engineering and math) are greatly outnumbered by men in nearly every field — both in earning degrees and being employed — for a number of reasons, including the fact that “negative stereotypes about girls’ abilities in math can indeed measurably lower girls’ test performance.”

By supporting minority scholarships, we’ll enable greater outcomes during and after a student’s postsecondary education, ultimately benefiting our nation’s growth and prosperity.

As the number of American college students who identify as minorities continues to rise, so too do their enrollment and completion rates. But, as we’ve covered here, there’s still a ways to go. Supporting minority scholarships can be a vital way to contribute to that growth — and to our nation’s success.