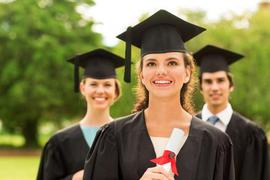 Graduation season is fast approaching, capping off years of study for college students across the country — and leading to an exciting, but unknown, future. For some, higher education will continue with graduate studies. Many others will step into the real world and join the American workforce. And that transition — from college student to full-fledged employee – delivers important benefits for students and society alike.

What does a brighter future look like for recent college graduates?

More chances to be employed. Just a few years ago, U.S. employment prospects looked grim. With the economy taking a major dip, the Great Recession left many college graduates with little to no job options. Fortunately, as the country has moved out of recession and into recovery, jobs have opened back up — but there’s still a ways to go, according to Georgetown University’s Center on Education and the Workforce (CEW). The CEW recently reported that a student’s chances of finding a job really depends on his or her major; “better times have yet to arrive” for some recent grads.

As the employment recovery continues, scholarship funding for all students gives them a chance to utilize their skills and studies in their community when they graduate, rather than taking the first job that comes along. Given the many benefits of a college degree — including higher pay, healthier lifestyles and more civically engaged individuals — graduates who find work in their field contribute to a stronger country.

Less debt. It’s no surprise that stories of crippling student loan debt increasingly popped up in the aftermath of the U.S. financial crisis of 2007-2008. Slim job openings and steep college tuition forced millions of students to rely on mounting student loans — including those that couldn’t afford to pay those loans back.

That can impact graduates far beyond their college years. This New York Times article summarizes the significance of some of those ripple effects:

“[I]t appears that people with student loans are less likely to start businesses of their own. A new study has found that areas with higher relative growth in student debt show lower growth in the formation of small businesses (in this case firms, with one to four employees). [….] Student loan debt also appears to be affecting homeownership trends. According to research by the Federal Reserve Bank of New York, fewer 30-year-olds in general have bought homes since the recession, but the decline has been steeper for people with a history of student loan debt and has continued even as the housing market has recovered.”

In addition, the article mentions the likelihood of debt affecting career choices, with fewer students likely to choose a low-paying public-interest job. The Atlantic also pointed out the potential health effects of student loan debt, including stress, depression and overall poorer health.

Rather than having one’s adult life start off with debt and delay, supporting students now means lessening their struggles in the future.

Supporting future generations. While many students are gearing up for graduation, it’s not too late to invest in a promising future for the classes behind them.

Take Janelle — a determined student whose family emergencies meant potentially putting her own education on hold in order to help them. With the help of Scholarship America’s Dream Award, she was able to reduce her four jobs to one, help her mom get the surgery she needed and stay on track with her studies.

A scholarship goes beyond helping one individual; its ripple effect is felt by those who support them, including their community. The opportunity to pursue postsecondary education creates a pathway for many future successes. And together, those contributions add up to a brighter future for us all.