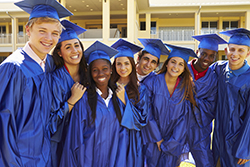 For millions of students across America, this is an exciting time of transition. Two of every three high school graduates who walk across the stage this spring will be moving onto higher education in the fall. For those young people, the future appears wide open: college will allow them to explore their skills and interests, expand their horizons and prepare for whatever they want to come next.

Unfortunately, too many of them will face a very different future than the one they’re planning now. Only about half of the students who attend two-year or four-year colleges in the United States end up earning their degrees within six years. The rest — around four in ten college enrollees — are embarking on higher education with high hopes, only to find themselves dropping out in a year or two. As college students, they were on the path to a better paying career, higher civic engagement and an improved quality of life—but dropping out often leaves students stranded with few options and potentially crippling debt.

As Eduardo Porter of the New York Times puts it, “Americans are actually enrolling in college and then dropping out halfway through — when they’ve probably already incurred a bunch of debt and won’t benefit from the better job prospects that come with a degree … [T]he most perplexing part of this accounting is that regardless of cost, getting a degree is the best financial decision a young American can make.”

A Degree is a Sound Investment

Some basic statistics bear out this fact. According to Census Bureau numbers, “the lifetime earnings of someone with a high school degree topped out, on average, at $1.2 million. A Bachelor’s Degree brought in an average lifetime earnings of $2.1 million, and a Master’s Degree $2.5 million.” Not every course of study has the same results, but the averages are compellig.

A degree also brings stability: for the last two decades, through boom times and recessions alike, the unemployment rate for high-school graduates has remained about double what it is for college grads.

Finally, college graduation and social mobility go hand-in-hand. As a 2016 White House report outlined, “Without a college degree, children born in the lowest fifth of the income distribution children have a 45 percent chance of staying in the bottom, and just a 5 percent chance of moving to the top. Yet when these same children go on to earn a college degree, their chances of making it to the top nearly quadruple, and their chances of moving out of the bottom increase by 50 percent.”

By every measure, higher education is the surest ticket to a better life, even with the massive rise in college costs and recent dips in federal aid.

The Real Crisis: Debt Without A Degree

In response to increases in tuition, fees and associated college costs, more and more students find themselves needing to take out loans. As a result, the well-publicized student loan debt crisis has reached trillion-dollar proportions, and Americans owe more on college loans than on any other form of consumer debt.

For bachelor’s degree recipients, increased earning power can make that debt manageable. But for students who don’t complete college, the same level of debt can cripple their efforts to pay bills, save money or invest in a car or home. As a result, their career options narrow, and the need to keep working to pay off debt makes it harder and harder to get back to school.

All Kinds of Support Can Help

As reported in Sallie Mae’s most recent How America Pays for College, scholarships and grants pay for around 28% of the average undergraduate’s college costs—just slightly less than their parents’ contribution, which remains the largest contributor. Both these facts underscore the critical importance of federal, state and private assistance in the face of skyrocketing college costs. For those of us reaping the benefits of a college education, supporting scholarships — especially renewable scholarships — with monetary donations is one of the most direct ways to help reduce financial burdens and keep students in college.

Money isn’t the only way to help, either. It’s true that financial struggles, and the need to balance work and school, lead thousands of students to drop out; for them, increased funding can make a huge difference. But, as a Stanford professor told the New York Times, “As we have larger proportions attending college, we are undoubtedly dipping down further in the preparation of students for college … This, in turn, leads to greater proportions of students dropping out before they complete a B.A. degree.”

To help these students prepare, local mentors, volunteers and guides are crucial. Donating your time — to help young people prepare in the classroom, navigate the financial aid system or find the right college fit — can do wonders for local students’ college success rates.